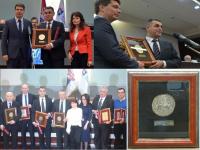 Club of Economic Journalists, 24.02. Chamber of Commerce of Serbia, in Belgrade, was officially awarded recognition ,, companies and personalities that have marked the year ”. The jury of the Club of Economic Journalists, unanimously decided to award Businessman of the Year belong Milovan Kocic, president of the company YUMIS.
From year to year the company ,, YUMIS ” has continuous growth, which is a rarity in the food industry in this region. The year 2014 will be remembered as one of the most successful in the 25 year history of the company. YUMIS exports its products to 18 countries on three continents, now together with Russia, Belarus and Somalia, preparing the ground for their products in China and Kenya. Annual revenue in 2014 was 1.2 billion pounds. – said Mr. Kocić.

,, First, thanks to the Club of Economic Journalists in such great recognition, that you are today set ourselves even higher goals for the future career, since I plan to deal with this business for many years. It is a great honor to be in the company of big businessmen and companies, which can be drivers of the recovery and development of the Serbian economy and that, in conjunction with the government of Serbia, can make a significant step forward Serbian economy.
I want to emphasize the great importance and contribution of all employees in the company YUMIS, whose selfless work and dedication achieved outstanding results time I run for me like prestižmo recognition.

I will reflect and eventually they come from, in order to draw the attention of all those responsible, both in the state and economic organizations, the importance and potential of southern Serbia. The news that I declared Businessman of the year 2014, it was a pleasant surprise for all fellow businessmen from southern Serbia, since such recognition has not went in the southern regions. I emphasize that this is a big boost for us all businessmen from the south of Serbia, that with more active attitude of those in charge, in this devastated and extremely poor area in the coming years, with even greater work achieve outstanding results.

Joint participation of our companies in the international market through trade fairs, exhibitions and participation in business delegations is one of the basic elements of success, which has an important role in the promotion of active, can play a Chamber of commerce of Serbia and SIEPA. On the other hand, the impetus in the development and creation of products and provision of resources necessary for the operation, in addition to giving banks and development funds. With the Development Fund, the company YUMIS has achieved excellent cooperation and funds invested in equipment and infrastructure. The company has regularly settled all obligations to the Fund and it is the only way that I can in the future that functions in a fund and finance in the economy.

I would stress that I expect the state to us, domestic companies, gifts and more attention to significant funding directed at stimulating employment and reviving local companies. On the other hand, we have the strength and desire to continue to develop our business in Serbia that employ a large number of our fellow citizens, generates revenue and profits and that they spend in Serbia, in our town, because here we live and work. Nama pirvrednicima or companies is the most important support of the state government, the ministries and especially the Chamber of Serbia in the security market. More companies today are missing the market, rather than loans, assets, investments, technology, human resources, skilled labor force, engineers, technologists … The idea also has! The common task of all of us to deal first of all for the chance to produce plasiramao, both on domestic and on foreign markets.

The presence of international companies of unfair competition, which brought with them the outlines, I would say, a slight imperialism and colonialism, has left little space for the products of domestic manufacturers.

I will reflect on the work of Serbian Chamber of Commerce and regional chambers of commerce. With ventricular trail 25 years I can say that the Chamber observe with great respect and high expectations. Viewed through such a long period of time that I inevitably chamber passing through various stages. I would say that it is not in the same rhythm followed the development of businesses, however, reported a gap between modern organized companies and chambers, which is still looking for himself. Impression that I primarily take care of itself, its employees, and not on the substance of the existence of the Chamber: to bring together companies, which provide the conditions for easier operation of the company, provide the best conditions for the operation and marketing of products and services. The chamber must become employers’ unions, or a member of social-economic council in the Government of Serbia! The new leadership of the Chamber of Serbia and we expect that,

Once again, big thanks from all of us, today awarded, you, you with us today, with the promise that we will all do our best to achieve even better results in the future. ,,